From social psychology to ecology

Peder is an historian of science, he obtained his PhD at the University of Harvard.

Arthur Tansley once amazed his botanical friends by arguing that the psychologist Sigmund Freud was the most important thinker since Jesus116. It was indeed remarkable statement for a man who is known for his contributions to the field of ecology. Yet Tansley was also a keen contributor to research on sex-psychology and I suggest here that some of his ecological thinking emerged from his work in social psychology.

Tansley, it is worth recalling, was educated at University College, London, in the 1890s in an environment of Fabian socialists who argued that science was worthless unless it was of some value to society. Though he was no radical, Tansley too strongly believed science should serve a social end and he often expressed sympathy with leftist views. As the Russian revolution advanced he was even accused of promoting ‘Botanical Bolshevism’ and in effect was denied a professorship at Oxford because of his (botanically) radical views103,104. Devastated by the conservative dons at Oxford he turned to psychology partly as a personal therapy, but also in order to be of some help in a society shattered by war. The result was his book 'New Psychology and its Relation to Life'81.

At the age of 49 Tansley experienced his first major public success; his book received flattering reviews in all major newspapers and intellectual journals. What caught the public’s attention was what several reviewers found to be a scandalous psychological explanation of God and sexual sin, about which Tansley soon found himself in the midst of controversy. The book soon became a bestseller.

Its success was partly due to Freud's theories being in vogue. Tansley's book was received in the larger audience as a thriller exposing hidden sexual forces in human societies. All the attention helped to establish Tansley as a scholar outside the closed circle of botanists and ecologists. He frequented psychology circles and lectured on Freud's theory of sexuality before the British Society for the Study of Sex-Psychology. His book was a popularized explanation of such clinical psychology, and aimed at a broad audience. He was taken by surprise, however, when he discovered that it was used as a textbook for students of the topic.


The book is largely a synthesis of Freud's psychology and a discussion (as the title suggests) of how it relates to life. The human mind, Tansley argues, follows the laws of biology, and these laws are allegedly best expressed in Freud's psychology. Tansley saw in that psychology a theory of how interactions of psychic energies search for an unconscious equilibrium within the mind and ultimately within society.

In 'New Psychology' Tansley outlines how the mind’s psychic energy constitutes a person's libido. The mind is not alone; its energy reaches other minds and hence creates social energies, clusters and networks. The mind's social life includes primary channels to secure biological needs, secondary utilitarian channels which measure psychic cost and benefit, and luxury channels for pure enjoyment of life. Most importantly, the economy of psychic energy must be in balance with its environment. A good mind always tries to restore a lost equilibrium, and a good leader always tries to create a well-organized herd out of a messy crowd in a society. It is likely that Tansley was inspired by Herbert Spencer, the eminent Victorian philosopher and social theorist (he coined the phrase ‘survival of the fittest’). Although Tansley does not specifically refer to Spencer, Tansley's writings about equilibrium of the mind and social herds clearly reflect Spencer's principles.

The primary force of the mind or the instincts is an ability to form systems in the form of either systems of the mind or social systems. Tansley's 'New Psychology' represents a blend of biology and mechanism. He seems to build on a long British tradition of explaining ethics in terms of sentiments and feelings instead of reason, although he places more emphasis on the social instinct than on private sentiment in traditional utilitarian epistemology.

After naturalizing the human mind in his psychology, Tansley turned towards a process of humanizing nature in his ecology. Such circular argument is most evident in a 1920 article written shortly after his book on psychology, where Tansley developed a method for the classification of vegetation based upon comparison with human communities34. Tansley coined and explained ecological terminology and taxonomy through a variety of analogies to social psychology: The development of plant associations finds its analogy to development of an individual organism; the phylogeny of plants recapitulates the ontogeny of human beings; the rise and fall of plant communities is analogous to the rise and fall of human civilizations; equilibrium in the environment is comparable with the equilibrium of the mind; and colonial terminology is useful in explaining the development of both human and plant societies.

Tansley did not offer a psychoanalytic explanation for his ecological studies. However, he did believe that a complex matter like the human mind or society could be explained in terms of simple biological processes, which in turn are based on physical and chemical laws of energy. The transfer of psychological terminology into the realm of botany was based on this assumption.

While pursuing his interest in psychology he also found time to publish 'Aims and Methods in the Study of Vegetation' with his friend Thomas F. Chipp48, a book that finally helped Tansley win, in 1927, the prestigious Sherardian Chair of botany at Oxford and a Fellowship at Magdalen College. His appointment was timely as ecology was much in vogue among Oxford’s biologists, who thought it could provide a new and better way of ordering nature, society and knowledge in a British Empire shattered by war. 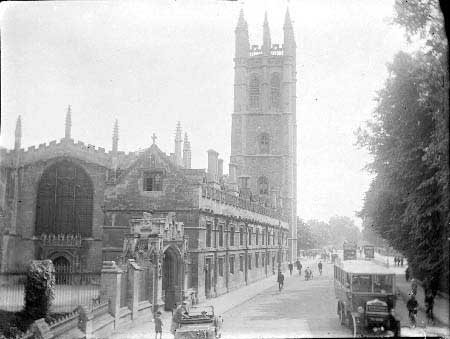 Magdalen College, Oxford in 1925. Trees on the right hand side hide the Botany Department and professor’s house which are opposite the college. Courtesy of Oxfordshire County Council Photographic Archive.

At Oxford, Tansley soon became involved with philosophy because the University in general, and Magdalen College in particular, was the scene of an intense debate between the romantic idealist and the material realist philosophers. The leader among the idealists was John Alexander Smith who in his 1930 lectures on the heritage of idealism argued that truth about the real world could only be understood through studies in the history of thinking. His main intellectual ally was Robert George Collingwood, who argued that scientific knowledge was based on the history of 'The Idea of Nature', the title of his widely used textbook generated from his lectures given at Oxford in the early 1930s112. To understand the history of ideas was for him the precondition for understanding the nature of scientific truth, which ultimately could lead to revelation of the ultimate truth that is with God. What concerned Collingwood was a moral decay, and a flight from Christian values into the ethically and politically suspicious path of positivism and material realism he saw in Tansley’s work in ecology and psychology, which he believed led to an unforgiving technological line of reasoning.

The realists at Oxford were equally well represented. Most notable among them was the clinical neurologist and neurophysiologist Charles S. Sherrington, who won the Nobel Prize in 1932 for his work on nervous systems, and the tutor in zoology, John Zachary Young. They revitalized Tansley's interest in psychology, and together they would form a clique focussed on understanding the nerve systems of both humans and animals.

As editor of Journal of Ecology, Tansley received in 1934 a series of three long papers in defence of an idealist approach to ecology128,129,130. They were written by the South African ecologist John Phillips. He knew Phillips from the Fifth International Botanical Congress held in Cambridge in 1930 where Phillips had presented a paper, ‘The Biotic Community’127. This laid out an idealist foundation for ecological research based on the philosophy and racist politics of his fellow South African, Jan Christian Smuts, Prime Minister of South Africa from 1919 to 1924 and 1939 to 1948. As a young man, Smuts had been an enthusiastic botanist and had become his country’s leading expert on savanna grass. He coined the word ‘holism’, the fundamental factor operative towards the creation of wholes in the Universe’138. Envisioning botany as a science that could unite the country through his philosophy of holisms, he, chillingly, added that although every organism is a whole, some are more ’significant wholes’ than others. Smuts was seen by Phillips and by Frederic Clements, the leading N. American ecologist, as an important thinker and a key patron of ecology.

Tansley’s response to Phillips’ and Clements’ botany came in his landmark paper, ‘Use and the abuse of vegetational concepts and terms’55, where he laid out the whole ecosystem concept. His approach to ecology was a progressive mechanistic alternative to the idealist biotic community concept of Phillips, whom he attacked in the strongest terms.

Psychology, sociology and ecology eventually complemented each other in Tansley’s mechanistic philosophy and, at least in ecology, it was his philosophy that prevailed.

This text is based on: Anker PJ. 2001. Imperial ecology: environmental order in the British Empire, 1895–1945. Cambridge, MA: Harvard University Press.