A research paper recently published in New Phytologist describes how the coco de mer palm manages to modify its extremely barren habitat in the Seychelles in such a manner that it produces the largest fruits of all plants, optimally supplying its offshoots and even protecting them from competition.

Three Coco de Mer fruits on a female tree. The fruits need up to 7 years to develop. Image: Dennis Hansen

Tourists are familiar with the Lodoicea maldivica palm, also called coco de mer, mainly because of their bizarrely shaped fruits. Scientists, however, are fascinated by the huge plants – which are abundant on the Seychelles islands of Praslin and Curieuse – for entirely different reasons.

The coco de mer palm engages in a lot of effort for reproduction, producing large amounts of pollen and huge fruits that cannot be spread around, but rather fall to the ground at the base. “This is an enormous commitment of energy in very nutrient-poor soil – it does not really make sense,” says Dr Christopher Kaiser-Bunbury of the Department of Biology at TU Darmstadt, describing the contradiction that brought about the study by a group of researchers from the Swiss Federal Institute of Technology in Zurich, the Seychelles Islands Foundation, and TU Darmstadt. “We asked ourselves how these palms get the nutrients they need for this.” 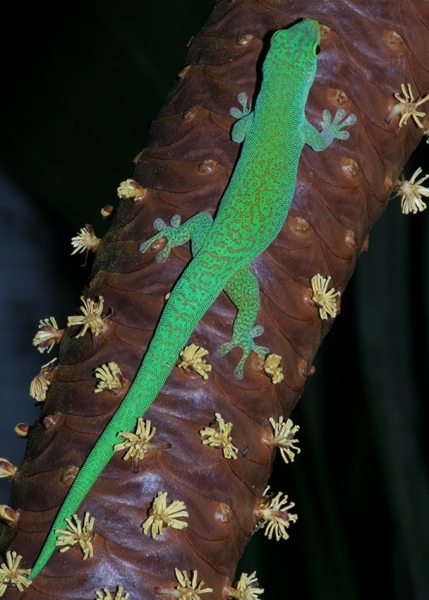 The study of the slow-growing coco de mer palm trees in the UNESCO Heritage Site Vallée de Mai on Praslin took several years. The scientists measured the amounts of phosphate and nitrogen that the palms invests into reproduction and growth, the amount available of these nutrients in the soil, the amount of water that flowed down the palm trunk during rain showers, as well as soil moisture in certain areas around the plants.

The researchers found that the special leaves of the coco de mer palm play a particular role. The broad, slightly feathery leaves reach enormous size – sometimes up to 10 square meters – and have a funnel shape, forming a tube that goes down the trunk. As a result, the palm captures water as well as animal and plant organic waste and debris. Even its own pollen is recycled if it is not eaten by geckos. The scientists found three times as much phosphate as in other palm trees near the coco de mer trunks. Almost all the water that rains down on the lush canopy of leaves is channeled into a small area at the foot of the palm tree. This is a highly effective method: “Even in a torrential rain, you can walk through the palm forest almost without getting wet” says Kaiser-Bunbury.

The offspring, which grow at the foot of the female palm trees, are given a healthy supply of nutrients and water thanks to this plant version of “parental care”. “The areas that are covered by the palm leaves and further away from the trunk are significantly drier and have fewer nutrients than expected” says Kaiser-Bunbury. The rainwater funnelling system thus ensures that other plants have difficulties establishing in these nutrient-poor, dry areas. “Many plants collect water, but we do not know of any species that has perfected it to such a degree” the biologist says.

The coco de mer modifies its own habitat, and it does this so successfully that it had formed a monodominant palm forest on Praslin. Therefore, it was the predominant species before people nearly drove it to extinction by overharvesting and deforestation. Animals and other plants evolved closely with coco de mer and coexist to date in the dense palm forest. 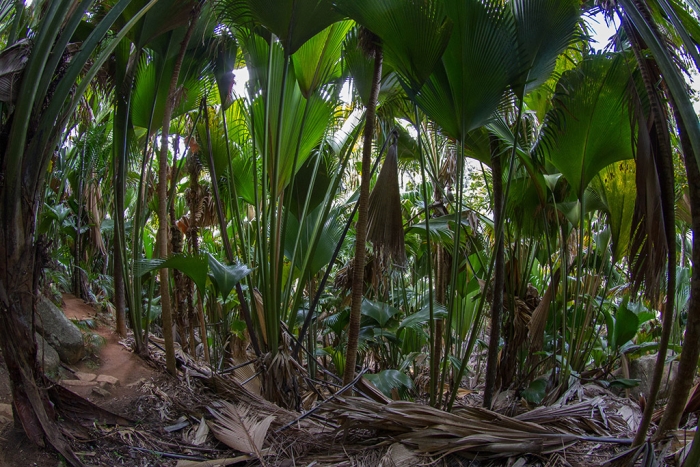 Coco de Mer trees in different stages of development and of different ages in the palm forest of Vallée de Mai. The Seychelles Islands Foundation is in charge of protection, research and management of this UNESCO World Heritage Site on Praslin Island, Seychelles. Image: Chris Mason-Parker

The research is being carried out in cooperation with the nongovernmental organization Seychelles Islands Foundation, which protects and manages the Vallée de Mai. The research went well beyond the goal of investigating the peculiarities of the palm tree.

Next, Kaiser-Bunbury is looking into modelling coco de mer forest dynamics based on the novel findings. “We would like to investigate how the monodominance of the palm tree can be maintained even if people actively manage the forest, for example, by planting new palms” says the biologist. In the past, the fruits were planted “in nice rows” and not close together in clumps at the base of the mother tree, which would be commonly found in a natural system. “We are interested in the impact of this clumped growth form on the entire forest ecosystem and particularly on the associated endemic fauna” says Kaiser-Bunbury, describing one of the future research objectives.