An increasing number of deceptive pollination systems and their underlying complex pollinator attraction mechanisms have been identified in recent years. Through structural, visual and scent cues deceptive plants mimic the presence of mating partners, oviposition substrates, and food to attract their respective pollinators, with an often remarkable specificity. The genus Aristlochia L. represents a prime example because seemingly all species in this genus deceive their pollinators.

In the latest issue of New Phytologist Oelschlägel et al. discuss interactions between the Mediterranean Aristolochia rotunda and its pollinators, and describe an extraordinary pollination system, kleptomyiophily, where the plant releases compounds that mimic those emitted from recently-killed insects in order to attract kleptoparasites.

The main pollinators of A. rotunda are female Chloropidae, kleptoparasitic insects that feed on secretions of true bugs (Miridae). Oelschlägel et al. note that Aristolochia flowers release a scent which mimics that of recently killed mirids – a scent which entices chloropids to visit the plant in search for a putative food source. Aristolochia thus ‘deceive’ their pollinators by promising the reward of a food source that the plant does not fulfil. 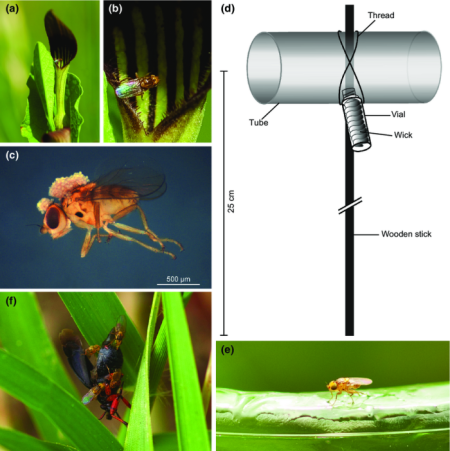 Figure 1 from the paper (Oelschlägel et al.). Actors involved in the newly discovered mimicry system and bioassay setup. (a) Flower of Aristolochia rotunda with a Trachysiphonella ruficeps individual at the margin of the flower tube. (b) Magnification of panel (a). (c) T. ruficeps pollinator collected from an A. rotunda flower in the female stage, carrying Aristolochia pollen on the head and thorax. (d) Flytrap used for bioassays. (e) T. ruficeps pollinator sticking to insect glue of a trap loaded with Mix ‘Aristolochia-Miridae’. (f) T. ruficeps individuals on a freshly killed Capsus ater. The fly in the upper part of the picture is feeding on C. ater secretions.