Many animals are able to recognise kin from strangers. This ability has allowed them to develop a diverse range of cooperative behaviours. By comparison, the occurrence of kin recognition in plants is less well studied. A recent report by Crepy and Casal however has demonstrated that kin recognition contributes to increasing fitness in the model flowering plant Arabidopsis thaliana. Shading between neighbouring plants can comprise their growth by reducing the light available for photosynthesis. In their study, Crepy and Casal found that kin plants were able to recognise their neighbours and promote light sharing by horizontally re-orienting their leaves so as to minimise shading between plants. Consequently, kin plants showed improved productivity, yielding more seed compared to non-kin plants or plants comprised in their ability to re-orientate their leaves (Fig. 2b). 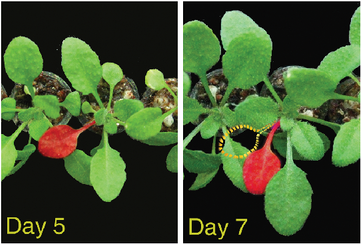 Figure 2b from the article (Crepy and Casal). Representative leaf (false coloured) changing its growth direction in a row formed by kin neighbours: originally oriented towards its neighbour (day 5), the leaf then grows towards the empty space out of the row of neighbours (day 7).

These new findings therefore highlight a mutual benefit for cooperative interactions between kin plants. The authors also go on to show that light cues perceived by specific photoreceptor proteins play a key role in re-orientating the leaves between neighbouring kin plants. To date, studies on plant kin recognition have largely centred on belowground interactions between roots. The work by Crepy and Casal now clearly demonstrates the contribution of aboveground interactions in mediating kin recognition in Arabidopsis. Taken together, these findings provide further evidence to support the existence of kin recognition in plants and should have important implications in improving productivity in agriculture.

See also the Commentary on Crepy and Casal by Harsh P. Bais entitled Shedding light on kin recognition response in plants which was published in the same issue 205:1 (December 2015).