Home » News » Forest pines have an ecological memory
Share this

Forest pines have an ecological memory


After irrigating forest pines in the dry Pfynwald (canton of Valais) over an 11-year period, researchers stopped the treatment to study the long-term effects. The trees’ reaction to this surprised the international research group led by the WSL. It was shown that tree growth is also influenced by past conditions. Forest pines have a kind of ecological memory. 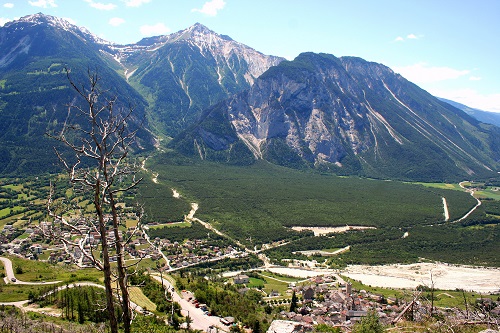 The Pfynwald in central Valais is the largest contiguous forest in Switzerland. Image courtesy of Reinhard Lässig (WSL) 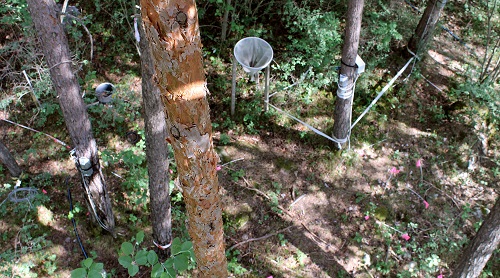 WSL scientists have been irrigating several forest plots in the Pfynwald since 2003. After 11 years, they stopped the irrigation of some of those plots. This long-term experiment provides the perfect conditions to study adaptations to dry and wet conditions. Image courtesy of Reinhard Lässig

Climate change is leading to an increase in drought in Valais. There has been an increase in forest pine mortality over the past two decades. The Swiss Federal Research Institute WSL have used an irrigation experiment to get to the bottom of the growth of forest pines in the Pfynwald. Since 2003, they have irrigated several plots to demonstrate the dependence of pine growth on sufficient water.

These irrigated trees, which were first dry and then watered, developed very well over more than a decade. They developed a denser crown and thicker trunks than their non-irrigated neighbours. At the end of 2013, the researchers stopped irrigating certain plots. The question arose whether the trees could benefit from the irrigated years or whether they were less adapted to the drier conditions after the long irrigation phase. The answer is multi-layered, because different organs of the tree react differently. However, the past clearly influences the growth of the pine, as the results of the study show.

As expected, the newly formed needles grew shorter in the first year after the irrigation was stopped than those in the years with irrigation. Surprisingly, the length of new branch shoots did not decrease in the first year but only in the second year without irrigation. The first indication of a so-called legacy effect, when the physiological response of a plant cannot be explained by current environmental conditions and past conditions need to be taken into account. There are reactions that do not have an impact in the next growing season, but only in following seasons. The trees could be described as having an ecological memory. 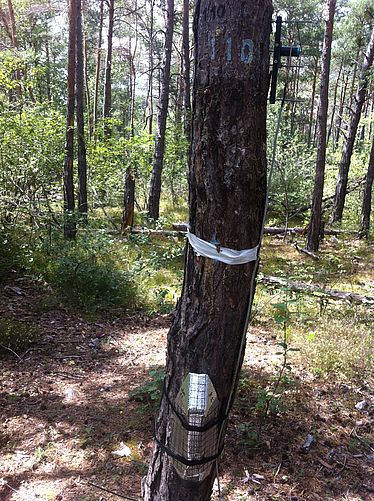 There is a sap flow sensor under the cover, attached to a pine trunk, which consists of two thin metal needles. This can be used to determine the amount of water flowing through a tree trunk. Image courtesy of Roman Doubt (WSL)

The most surprising thing was the development of radial stem growth. The annual growth in wood and bark of trees that were no longer irrigated did not immediately decrease as expected. The annual stem growth remained greater than the control trees  The trunk growth benefited from the irrigation phase long after it ended. The researchers showed that this was not due to water remaining in the soil after the irrigation period.

The researchers used a system-analytical tree model to explain the unexpected pattern of trunk growth. It links the legacy effects with the turnover rates of various tree organs and the carbon store. The turnover rates of the needles, sapwood and carbon reserves were roughly 3–5 year, 50 years and 10 years respectively. This means that the environmental conditions up to 50 years ago can still influence growth today through the impact that they had on structures formed at the time.

The lifespan of the needles, and thus the environmental conditions of the past four years, had the greatest impact on the growth of the stem. It was four years before the enlarged crown of the previously irrigated pine trees in the Pfynwald had reduced to the level of the trees that were never irrigated.

Drought can also have an impact over years 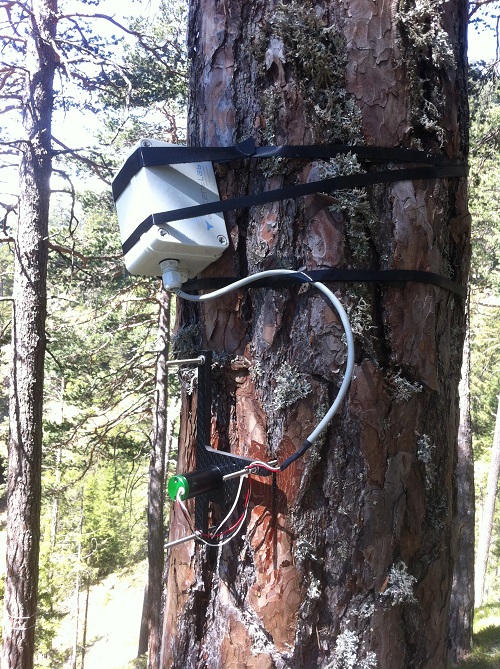 A point dendrometer with two sensors on a pine trunk in the Pfynwald. Image courtesy of Roman Doubt

This research shows that humid conditions can have a positive effect the intensity of tree growth during several subsequent dry years. However, there is also the reverse conclusion that an extreme dry year has a negative impact on several subsequent years. Tree growth and many other physiological processes not only depend on the current weather conditions, but are also influenced by the physiological processes of the previous years. The pronounced drought of the record summer 2018 should therefore cast its shadow for years to come.