Natural diversity could hold the key to boosting rice yields


Edited from a press release.

Rice is food for more people than any other plant and serves as the main staple for some 560 million chronically hungry people in Asia. With over 120,000 varieties of cultivated rice (Oryza sativa) across the globe, there is a wealth of natural diversity to be mined by plant scientists to increase yields. A team from the University of Illinois and the International Rice Research Institute (IRRI) examined how 14 diverse varieties photosynthesize – the process by which all plants convert sunlight energy into sugars that ultimately become our food. Looking at a little-studied attribute of photosynthesis, they found small differences in photosynthetic efficiency under constant conditions, but a 117 percent difference in fluctuating light, suggesting a new trait that could be selected by breeders hoping to increase yields.

“We looked at 14 cultivars of rice that represent much of the crop’s diversity and asked the question: could there be variability in photosynthesis in fluctuating light that we might be able to capitalize on?”

“If you look within the canopy of leaves of any crop, you will see that the light is fluctuating by one or two orders of magnitude,” Long said. “A plant’s access to light is not only impacted by clouds intermittently obscuring the sun but much more commonly by its own leaves, or those of a neighboring plant as the sun’s angle changes throughout the day. Calculations show that the photosynthetic inefficiency imposed by these leaves slowly adjusting to each fluctuation in light may cost crops 20 to 40 percent of their potential productivity.”

The researchers compared results from constant and fluctuating conditions and found no correlation, which supports findings from a 2019 study on cassava. In other words, varieties that do well in fluctuating light might not do well in constant light and vice-versa, suggesting that selection for these traits would have to be conducted independently. 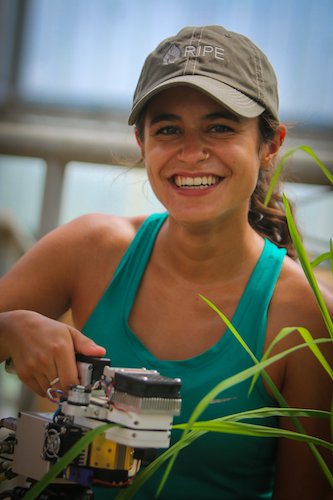 “This lack of correlation, which seems to be consistent across species, calls for us to flip how we think about studying photosynthesis,” said first-author Liana Acevedo-Siaca, a graduate student in the College of Agriculture, Consumer, and Environmental Sciences (ACES). “Moving forward, we need to incorporate more dynamic measurements into the way that we understand photosynthesis, especially in an agricultural setting because realistically those plants are never in a steady-state.”

The team also evaluated how these plants cope with fluctuations in light intensity across the five major rice groups, sometimes considered to be subspecies. While no group appeared better than the other overall, variation could still be found in future research.

In this study, three photosynthetic parameters were of particular interest: the speed of induction (how quickly photosynthesis activates, or starts), speed of assimilation (how quickly the plant physically fixes carbon), and how efficiently these rice plants use water.

After switching from low light to high light, one variety activated (or began photosynthesizing) 117 percent faster than the slowest. In fluctuating light conditions, another variety from the Indica group assimilated more than double that of the “worst” variety (also an Indica), which was found to be the most water-use efficient variety.

“Surprisingly, after making a more detailed analysis of these accessions along with a well-studied control called IR64 from the Philippines, we found that biochemistry is the biggest limitation to efficiency as leaves transition from shade to sun,” Long said. “Biochemistry is a different limitation altogether than that found in a parallel study of cassava, illustrating the need to fine-tune photosynthesis separately in different crop species – despite the fact that the photosynthetic process is generally well-conserved and consistent across most food crops.”

According to Acevedo-Siaca, the next step is to identify how to breed for (or engineer) rice with faster induction responses.

“At the end of the day, the goal would be to have crops that can respond more quickly to light fluctuations enabling them to be more productive,” said Acevedo-Siaca, a 2016 recipient of the U.S. Borlaug Fellowship in Global Food Security that supported her to conduct much of this research at IRRI. “I am interested in ways that we can improve this process while preserving some of the germplasm we have out there—there’s so much diversity with which we could work. I think it would be a shame if we didn’t examine all of our options more deeply.” 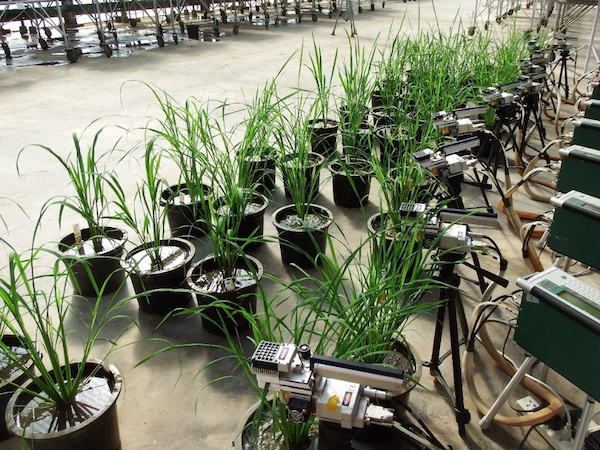 A team from the University of Illinois examined 14 rice varieties to discover natural differences in how the plants harness light energy to fix carbon dioxide into food. Photo provided by first-author Liana Acevedo-Siaca.

Published in New Phytologist, this work is part of Realizing Increased Photosynthetic Efficiency (RIPE), an international research project that is developing staple food crops that turn the sun’s energy into food more efficiently to increase global food production sustainably with support from the Bill & Melinda Gates Foundation, the U.S. Foundation for Food and Agriculture Research (FFAR), and the U.K. Government's Department for International Development (DFID).