Scientists at the University of British Columbia have uncovered key mechanisms that trees use to defend themselves against the most destructive insect pest of spruce plantations in British Columbia, the spruce weevil. The research was conducted under the direction of lead scientist Dr. Jörg Bohlmann of the Michael Smith Laboratories.

Dr. Bohlmann’s research in spruce comprehensively explores a family of aromatic compounds called terpenes in conifers. Terpenes play key roles in defense against insects and pathogens and are the major components of oleoresin in conifers. In addition to terpene-rich oleoresin, Dr. Justin Whitehill, a research associate in the Bohlmann lab, has shown that hard, specialised structures called stone cells, found in the tips of tree stems, may play a role in the tree’s defense response. However, the exact role of stone cells and oleoresin in conifer defense remained unclear.  Whitehill, the primary author of the study, set out to answer this question. "We knew that all of the individual components of resistance were in place [terpenes and stone cells], but we didn’t know the mechanisms by which they were exerting the resistance phenotype against weevils." 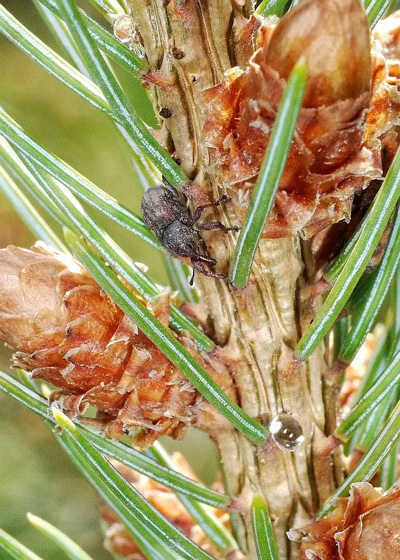 Terpene-rich oleoresin exudes from a puncture in the tip of spruce tree stems, where adult weevils lay their eggs. Photo courtesy of Dr. Ward Strong (BC Ministry of Forests).

By implanting weevil eggs in areas that were either abundant or sparse in stone cells and observing how larvae responded, Whitehill discovered that stone cells act as physical 'blockades' that restrict the larvae’s movement and leave them vulnerable to 'ambush' by oleoresin. Subsequent prolonged exposure to terpenes can have enhanced toxic effects against developing weevils. 'Stone cells represent an extremely important mechanism of defense in conifers against insect pests. Spruce trees have adapted the stone cell trait, which normally functions as an added form of mechanical support within stems, to synergise with other defense components, primarily oleoresin, in order to produce a more robust resistance mechanism against chewing insects. We demonstrate that stone cells and oleoresin work together and contribute equally to the resistance phenotype."

Whitehill and Bohlmann are now working to improve their understanding of how weevil larvae interact with specific compounds in oleoresin and genes controlling stone cell formation, and are hopeful that these discoveries will allow spruce tree breeders in the BC Ministry of Forests to more quickly identify trees with enhanced resistance against stem-feeding insects. "The ultimate goal is to be able to pre-select trees, by identifying key genetic components responsible for the resistance phenotype," said Whitehill, "and to develop simple tools to screen the trees early in the growth process."

The research is funded through Genome Canada’s Large-Scale Applied Research Project (LSARP) and in conjunction with the BC Ministry of Forests, Lands, Natural Resource Operations.

From a news release.