Home » News » The bark side of the force
Share this

The bark side of the force


What forces enable trees to stand upright? To grow straight, plants need a motor system that controls their posture by generating forces to offset gravity. Scientists have long thought that this motor force was controlled only by the internal forces induced in wood. In a study published on 4 August 2018 in New Phytologist, researchers from the CNRS and Cirad show that bark is also involved in the generation of mechanical stresses in several tree species. 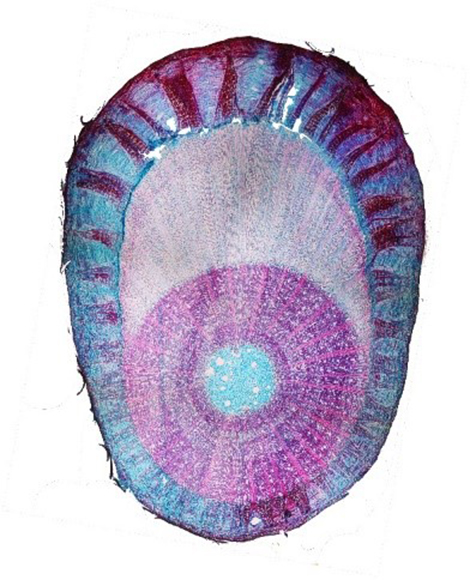 Anatomical cross-section of a young Cupuaç tree (Theobroma grandiflorum), grown staked and artificially tilted. In the center, the fragile tissues of the pith. Around it, the wood, which is more developed on the upper side, and whose tissue is very rich in parenchyma and almost devoid of fibers. Lastly, on the outside, the bark, which is more developed on the upper side, with bundles of fiber trellises organized into safranin-red flames, set apart by dilated parenchyma cells (colored in Astra blue). Width: 8 mm; height: 10.3 mm. © Jonathan Prunier, Ecofog laboratory (CNRS / AgroParisTech / Cirad / Inra / Université de Guyane / Université des Antilles).

As the vertical position is unstable – for both trees and humans – trees need a mechanism that counteracts the force of gravity in order to remain upright. To ensure that they grow vertically, trees need both a 'skeletal' system, which is achieved through the stiffness and strength of the trunk material, and a 'motor' system to control their posture by generating forces that offset gravity. Although the skeletal function of bark has already been demonstrated, its motor function (as the tree's 'muscle') has generally been overlooked in biomechanical and ecological studies, as wood was considered to be the only tree tissue with active mechanical functions. 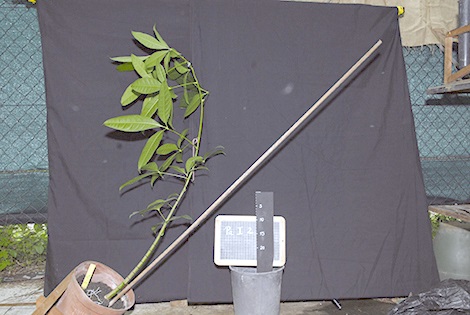 Young Guiana chestnut (Pachira aquatica) tree. The tree has been titled and staked. As it has grown it has generated forces in its bark to grow upright. When the tree is released from the stake, the energy accumulated is released and causes the tree to bend. © Barbara Ghislain, Ecofog laboratory (CNRS / AgroParisTech / Cirad / Inra / Université de Guyane / Université des Antilles).

To understand the role of bark, researchers from the Ecofog laboratory (CNRS / AgroParisTech / Cirad / Inra / Université de Guyane / Université des Antilles) and the LMGC laboratory (CNRS / Université de Montpellier) grew tropical species at a tilted angle. The forces that developed in the stems of the young staked trees produced a stem curvature as soon as the stakes were removed. In certain species, when the bark of the stem was removed this curvature was lost, which demonstrates that the forces responsible for stem up-righting are located in the bark. 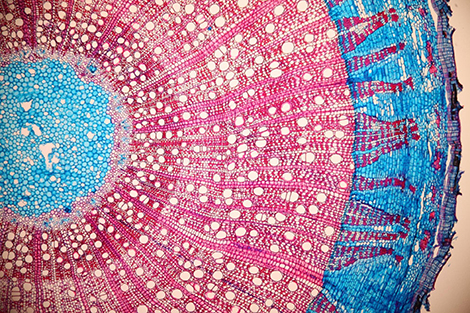 Detail from an anatomical cross-section of a branch of a Guiana chestnut tree (Pachira aquatica) taken from the banks of the Kourou River (French Guiana). On the left, the pith. Around it, the wood, where we can make out the vessels, which transport sap. Lastly, on the outside, the bark, with fiber trellis bundles organized in flame shapes (red), set apart by parenchyma cells (blue). © Bruno Clair, Ecofog laboratory (CNRS / AgroParisTech / Cirad / Inra / Université de Guyane / Université des Antilles).

The mechanism generating these forces is linked to the specific structure of the bark, where the fibers are organised in the form of a trellis. When the stem grows, the development of the layers of wood increases the circumference of the bark. The trellis structure of the fibers in the bark is such that this stress generates forces along the stem. If the stem is titled, the growth is more rapid on the upper side of the stem, leading to the generation of asymmetric forces. It is this asymmetry that allows the stem to curve upwards. In five of the nine tree species studied, the generation of forces enabling the tree to offset gravity is thus not simply due to the maturing of the walls of the wood cells, but also to the wood growth in this smartly organised trellis of fibers in the bark.

Fiber trellis organization within the inner bark of a Theobroma Cacao. Left: inner part close to the wood; center: middle of the bark; right: outer part of the bark. The growth of the wood on the bark spreads the trellis apart laterally, generating traction in the axis of the fibers. © Barbara Ghislain, Ecofog laboratory (CNRS / AgroParisTech / Cirad / Inra / Université de Guyane / Université des Antilles).

Nature has solved an infinite number of engineering problems. The ability of trees to grow vertically by optimally organising their tissues is a potential source of inspiration for new developments in materials science.

Taken from a press release.