Home » News » Invasive species research: a model for plant ecology in the Anthropocene?
Share this

Invasive species research: a model for plant ecology in the Anthropocene?


Humans are rapidly and fundamentally transforming the ecology of the planet. Many scientists argue that we have entered a new geological era, the Anthropocene. Such global change presents not only huge challenges for sustainable land use and biodiversity conservation, but also forces ecologists to rethink their research strategies to understand the dynamics of novel, globally connected, and continuously changing ecosystems.

Cinnamomum verum dominates large tracts of forests in the Seychelles archipelago in the Western Indian Ocean. It was introduced in the late 18th century for spice production and has likely profited from a window of opportunity in the 19th century when the Seychelles were largely deforested.

Invasion science has been a global change science ahead of its time. For over 50 years it has been addressing the global reshuffling of plants and animals through human transportation and asking whether some species behave differently in areas where they do not occur naturally.

A new Tansley review published in New Phytologist has shown how invasion science can be used as a model to demonstrate the shortcomings in current ecological research and identify new strategies that will aid scientists in our understanding of global change processes.

The Authors make four key suggestions to improve plant ecology in the Anthropocene and illustrate it with examples from invasion science: 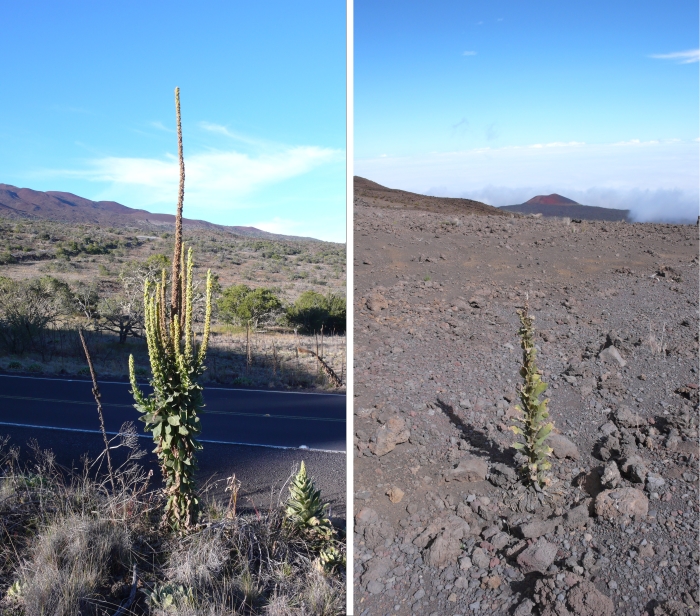 Verbascum thapsus at mid and high elevation on Mauna Kea, Hawaii illustrating the importance of accounting for variation of plant traits / performance along environmental gradients

In this paper the authors demonstrate that there are important lessons to be learned from invasion science, and by taking heed of these lessons, ecologists will be better placed to understand and predict ever-changing ecosystems in the Anthropocene era.

Click here to read the paper in full for free.

One of a variety of ecosystems invaded by Acacia sp.