The Venus flytrap captures insects for more than just nutritional purposes. A research team lead by Prof. Dr. Heinz Rennenberg and Lukas Fasbender from the Institute of Forest Sciences at the University of Freiburg has proven the carnivorous plant extracts also energy from its prey.

The Venus flytrap (Dionaea muscipula) can be found in the United States in areas with nutrient-depleted soil. The plant compensates for its environmental limitations by trapping insects in their outer green stomach: specialised leaf traps, which decompose the insects with the help of digestive juices. By doing so, they are able to extract nutrients such as phosphorous and nitrogen, which are lacking in the soil, but present in the insects themselves. Up until now, researchers assumed that energy production played no part in the process because they thought the oxidation from photosynthesis was sufficient for the plant’s energy needs. With the help of light energy during photosynthesis, oxygen and glucose are produced from carbon dioxide and water. The sugar can be transformed into energy through respiration, whereby carbon dioxide is emitted. 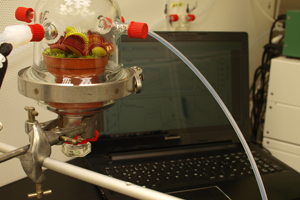 Through their experiment, published in New Phytologist, the researchers discovered that the Venus flytrap indeed extracts energy from its prey. In order to prove their theory, the researchers placed artificial nutrients – a solution laced with the amino acid glutamine – into the leaf traps of the plant. They used stable, non-radioactive 13C-isotopes, differing from other carbon atoms due to their higher mass, to label the glutamine carbon. With the help of an infrared laser they were able to prove that these 13C-isotopes from the prey occurred in the carbon dioxide that the plant emitted, starting about one to two hours after feeding.

The scientists now assume that the process of ingestion and energy production in the Venus flytrap is more complex than thought: The carnivorous plant thus uses the energy it receives during photosynthesis to begin the digestive process and to access nutrients. In order to maintain this process, it produces additional energy by oxidizing amino acids that it extracts from its prey, thereby gaining access to yet another energy source.

Heinz Rennenberg is a Professor for Tree Physiology. Lukas Fasbender is a doctoral student for the Chair of Ecosystem Physiology in the Faculty for the Environment and Natural Resources at the University of Freiburg.

This is an edited version of a press release published by the University of Freiburg.