Home » News » New insights into heterostyly in primrose
Share this

New insights into heterostyly in primrose


New insights into heterostyly in primrose

Researchers in the UK shed new light on the mystery of genetic control of floral development in primrose (Primula vulgaris), a cluster of three papers published in New Phytologist’s Early View reveal.

Primroses are one of many species displaying heterostyly, developing two distinct floral forms known as ‘pin’ and ‘thrum’. The stigma of pin plants is positioned at the entrance to the flower at the end of a long style, while the anthers are positioned midway down the floral tube. In thrum flowers the style is much shorter, leaving the stigma around halfway up the floral tube, with the anthers positioned near the entrance to the flower. 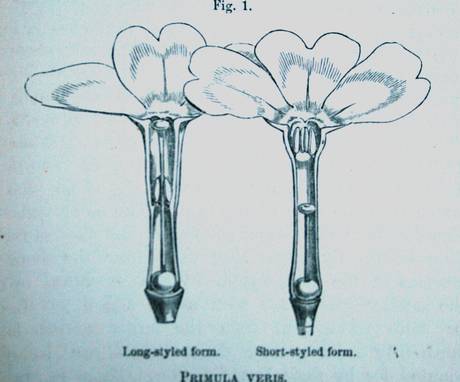 As Philip Gilmartin describes in his Tansley Review, the importance of heterostyly was initially overlooked; famed botanist and taxonomist Carl Linnaeus argued that, “flower enthusiasts focus on small floral details that no sane Botanist would consider important”. It was Charles Darwin who first realised the significance of heterostyly as a mechanism for promoting out-crossing by promoting insect-mediated reciprocal transfer of pollen between floral morphs. Gilmartin’s review goes on to discuss the influences on Darwin’s ideas about heterostyly, including the historical landscape of botanical illustration and his later reflection that, “no little discovery of mine ever gave me so much pleasure as making out the meaning of heterostyled flowers”.

Although there has been important progress since Darwin’s 1892 paper, the genetic regulation of heterostyly is not well understood. In primrose, floral heteromorphy is controlled by a cluster of tightly-linked genes known as the S locus. Jonathan Cocker and colleagues from Norwich, UK, investigated a novel S locus-linked dominant mutant, Oakleaf, to provide a new phenotypic marker to aid in the construction of a genetic map (Cocker et al., 2015). Oakleaf plants produce distinctive lobed leaves, abnormal flowers and occasionally ectopic meristems on the leaf veins.

Cocker and colleagues utilised the draft primrose genome sequence currently under assembly in Norwich to examine the gene expression in Oakleaf versus wild type plants, discovering hundreds of genes that were up- or downregulated in the mutant leaves and flowers. The lobed leaves, ectopic meristem and dominant phenotype of the Oakleaf mutant suggested that the gene involved might be homologous to the Arabidopsis KNOX genes, however their results proved inconclusive.

By crossing Oakleaf to both wild type plants and other primrose mutants linked to the S locus, Cocker et al. were able to examine the inheritance of genes in the S-locus. This work enabled Jinhong Li and collaborators from Norwich, Durham and Leicester to produce an integrated genetic and physical map across the S locus. They also identified 82 S locus-linked genes that are prime candidates for the genes regulating primrose heterostyly. Fortunately, Oakleaf was located on one side of the S locus and other mutants sepaloid and Hose in Hose were positioned on the other side, enabling their use as phenotypic markers to investigate and identify S locus-linked heterostyly genes in the future.