Insights into the past inform conservation for the future


The Qinghai-Tibet Plateau (QTP) is the largest and highest plateau in the world. The uplift of the QTP creates extraordinary geomorphological and climatic diversity, promoting rapid radiation in plant lineages, while also harbouring some ancient relictual taxa, such as Circaeaster, a genus that contains only one species – Circaeaster agrestis.

Morphologically, C. agrestis has an open dichotomous leaf venation, similar to ginkgo, suggesting an ancient history of origin. C. agrestis distributes sporadically in the Himalayan and Hengduan mountains and reaches the Shennongjia forest region in the east. It has a narrow habitat and is listed as a rare and endangered plant under national protection. 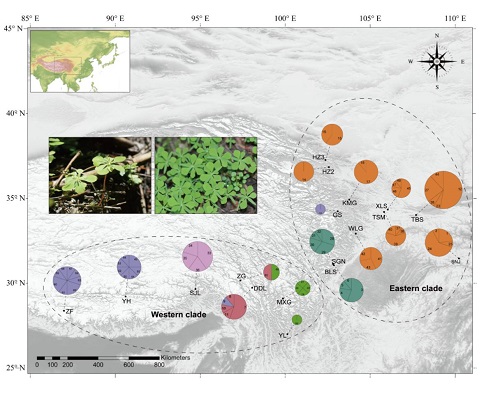 How does this endemic Chinese plant with unique morphological characteristics and vulnerable habitats survive and reproduce in nature? How do population divergence histories inform the protection of important resource plants in China?

The results revealed significant genetic structure with an extraordinary disequilibrium of genetic diversity among distributions of C. agrestis, and signals of isolation by geographical and niche distance. The populations were estimated to begin diverging in the late Miocene. The uplift of the Hengduan Mountains may have promoted the divergence of C. agrestis. Both environmental gradient and redundancy analyses revealed significant association between genetic variation and temperature variables.

This study gives genomic insights into the population structure and evolutionary history of ancient relicts in China. It also aids the development of sound conservation programs in the face of a rapidly changing climate.

This work was supported by the Programme Foundation for the Backbone of Scientific Research by the Wuhan Botanical Garden of the Chinese Academy of Sciences.