Edited from a news release by Cimone Barros, Inpa (in Portugese).

A study from the National Institute of Amazonian Research (INPA) shows that environmental degradation, caused by the construction of hydroelectric dams in combination with climate change, can permanently alter the flood-pulse (annual rise and fall of the waters of the great rivers of the Central Amazon) below the dams – damaging entire ecosystems.

These changes to the flooding regime of flooded forests result in the increased mortality of long-living trees in the Amazon, such as Eschweilera tenuifolia (macacarecuia) - a symbol of black-water forests (igapó) that is highly adapted to flood pulse. 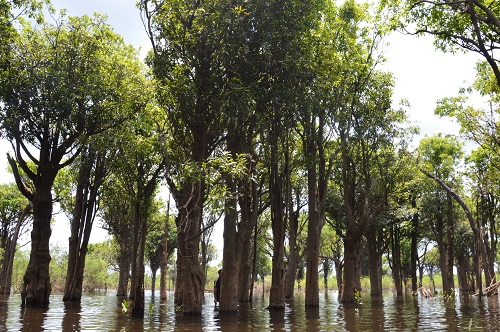 A population of macacarecuia growing in the black-water forest of the Jaú National Park. Image courtesy of Tayane Carvalho.

The researchers sought to elucidate the relationship between climatic and anthropogenic disturbances and the growth and mortality of macacarecuia. Macacarecuia belongs to the same family as the brazil nut (Lecythidaceae) and has adapted to survive prolonged floods. It can spend up to ten months of the year totally or partially submerged, but it needs one to two months in dry land to perform its physiological activities. The tree forms dense wood, has slow growth and has high longevity. In the study, a tree of more than 800 years old was found.

For this, they compared the growth and mortality of the macacarecuia in an undisturbed environment (Jaú National Park) to an environment downstream of the Balbina hydroelectric dam that is disturbed by changes to the flood pulse. One of the researchers, Jochen Schöngart, highlights that ‘The plant was one of the worst social and environmental disasters in Brazil. The construction flooded an area of native forest of 2,400 km2. When it started operating, it did not even meet half of the electricity demand in the capital of Amazonas, which continued to depend on thermal plants’.

The study found that the genetic heritage of one of the tree species most adapted to flooding is threatened. The researchers highlight that ‘This represents the risk of losing individuals which for centuries went through different floods and droughts, well before the arrival of Europeans in the Amazon region, but which are now dying as a result of modern humans who have been altering directly (hydroelectric plants) or indirectly (climate change) the flood regime of the largest hydrographic basin in the world’. 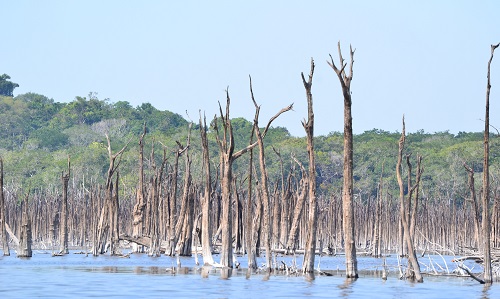 A population of macacarecuia trees in the Uatumã river igapó, downstream of the the Balbina dam, which have died as a reult of alterations in the flood pulse. Image courtesy of Angélica Resende.

The trees that grew in the undisturbed area showed differences in growth after 1975, when periods of intense floods in the rivers of the Central Amazon followed and great climatic changes in the global panorama intensified, which affected even the remote areas of Amazonian igapó. ‘Even in the undisturbed area, some trees died in different periods. These were often associated with La Niña events and the cold phases of the Pacific Interdecal Oscillation, which is the cooling of the surface waters of the Equatorial Pacific Ocean in the short and long term (over the year or over decades) that results in increased rainfall and floods in the Central Amazon, as seen in recent decades’ explains Schöngart.

As for the trees growing downstream of the Balbina hydroelectric plant, there were distinct changes in the growth pattern after the implementation of the hydroelectric plant, and there was mass mortality of macacarecuia and other species such as arapari. A previous study by the authors of this article showed, through satellite image analysis, high tree mortality in igapós up to 125 km below the Balbina dam (published in 2019 in Science of the Total Environment). Low areas of flooded forest were dominated by thousands of dead trees as a result of the construction and operation of the Balbina dam. 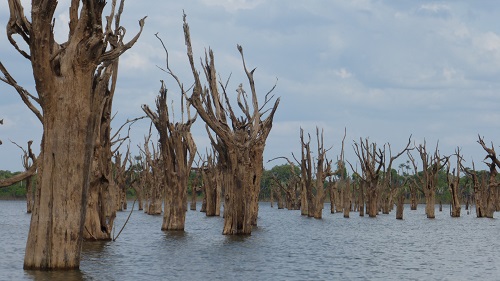 A different monodominant population of macacarecuia trees in the Uatumã river igapó, downstream of the the Balbina dam, which have also died as a reult of alterations in the flood pulse. Image courtesy of Jochen Schöngart.

To reach these results, field data and samples of live and dead trees were used to analyse the growth rings at Inpa and the Max Planck Institute for Biogeochemistry. This information was cross-referenced with historical climate and anthropogenic changes in the two conservation units.

According to the leading author, Angélica Resende, many of the trees died during the construction of the dam, when there was a great reduction in the availability of water in the igapós downstream of the dam because of the damming of the Uatumã River for the creation of the Balbina reservoir. The operation of the dam also caused massive tree mortality by creating extremes of either a lack or excess of water that surpassed the adaptive capacity of the species.

‘The forecast is that the frequency and magnitude of these two extremes of lack and excess of water are expected to increase due to the climatic changes underway and plans to implement dozens of large hydroelectric plants in the Amazon rivers’ says Resende.

In conjunction with other results obtained under the Peld-Maua do Inpa project, the results show the impacts on flooded igapó forests in Central Amazonia of the changes in the flood pulse because of climate change and land use (hydroelectric plants).

The authors recommend, in terms of public policies, that decision-makers consider the potential impacts on the floodable areas downstream of planned hydroelectric plants when carrying out Environmental Impact Studies and Reports (EIA/Rima). They also suggest that there should be an adjustment in the power generation of existing plants and those under construction in order to maintain a flood pulse in the flooded areas downstream of the dam, ensuring the survival of important species.

To mitigate the impact of climate change in the Amazon, the authors recommend concrete actions at the international level, reducing greenhouse gas emissions at the global and regional level and, simultaneously, reforesting degraded areas on a large scale.

The work is based on the thesis of Angélica Resende as part of her work in the Graduate Program in Biological Sciences - Botany of Inpa in collaboration with Jochen Schöngart (principal advisor of Resende), Maria Teresa Piedade, and postdoctoral researcher Flavia Durgante. Piedade and Schöngart are coordinator and vice-coordinator, respectively, of the Long-Term Ecological project carried out by the Research Group on Ecology, Monitoring and Sustainable Use of Wetlands (Peld-Maua / Inpa), a group that has been studying wetlands in the Amazon for decades.