Home » News » Getting to the root of crop improvement
Share this

Getting to the root of crop improvement


From a news release.

The study by Argentine scientists opens paths for the design of crops that adapt to drought and other adversities associated with climate change.

Just as stem cells in mammals can differentiate to form the brain, stomach, eyes, and other organs, something similar happens in plants.

Argentine scientists have identified a key molecule that promote the development of radical hairs (root cells responsible for absorbing water and nutrients from the soil) from specialised root edpidermis cells called trichoblasts.

“If we know the mechanisms that regulate the development of root hairs – their size, ability to detect water and nutrients in the soil and absorb them – we will be in a position to develop crops that adapt to drought conditions and other adversities associated with climate change,” said José Manuel Estévez, CONICET researcher and head of the Molecular Bases of Plant Development laboratory at the Fundación Instituto Leloir.

Together with Estévez and other co-authors, authors Cecilia Borassi and Javier Gloazzo Dorosz performed studies using the model plant Arabidopsis thaliana. They discovered that the inhibition of a molecule called AGP21 glycopeptide triggers the differentiation of radical hairs from the trichoblasts.

The scientists inhibited the AGP21 molecule in Arabidopsis plants and observed that the density of root hairs was roughly twice that observed on other plants of the same species. 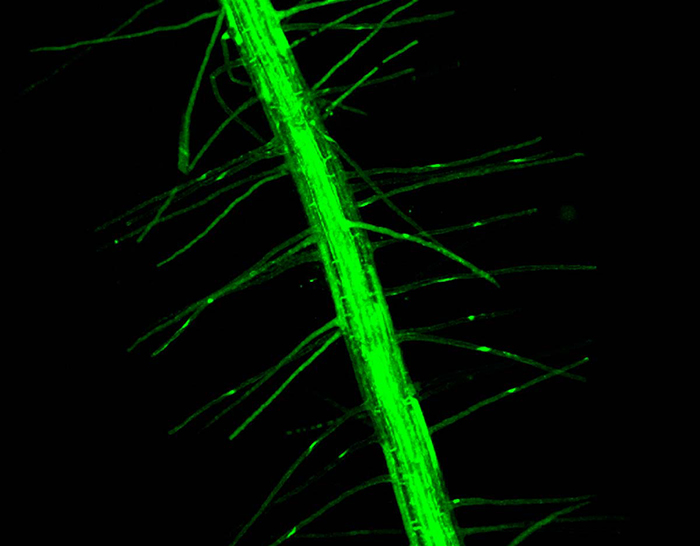 In Arabidopsis plants, the scientists doubled the density of root hairs, root structures that absorb water and nutrients from the soil.

“Our study also indicates that the AGP21 glycopeptide interferes with the action of brassinosteroids, a plant hormone that regulates certain genes that are key for the development of radical hairs. Inhibiting this molecule is like lifting the brakes so that these key root structures can begin growing,” explained Borassi.

Detailed knowledge of the role of AGP21 in the Arabidopsis root epidermis “could be applied to study how the performance and yield of crops of agronomic interest can be improved in adverse environmental conditions,” Borassi said.