Edited from a news release (in Spanish).

A field study in the Los Alcornocales Natural Park in Cádiz has shown that exotic pathogens, particularly the Phytophthora cinnamomi oomycete, are a limiting factor in the regeneration of the Mediterranean forest.

Jara Dominguez-Begines and Lorena Gómez-Aparicio, researchers at the Institute of Natural Resources and Agrobiology of Seville (part of the Higher Council for Scientific Research (CSIC)) and co-authors of the study, explain that many forests worldwide are currently experiencing regeneration problems, since the rates of establishment of new individuals do not compensate for the increasing mortality rates of mature trees.

Such is the case in the forests and meadows of holm oak and cork oak that cover the Iberian Peninsula, where the mortality of mature trees caused by P. cinnamomi is a severe problem that threatens their long-term conservation. This pathogenic oomycete of Asian origin destroys the fine roots of the tree, preventing the absorption of water and nutrients, and causing its death. Oomycetes are microorganisms that have a growth form similar to fungi, but are actually a separate group. The authors emphasise that this is the first time that a study shows that soil oomycetes are not only involved in the mortality of mature trees, but that they considerably reduce the probability of natural establishment of new seedlings. 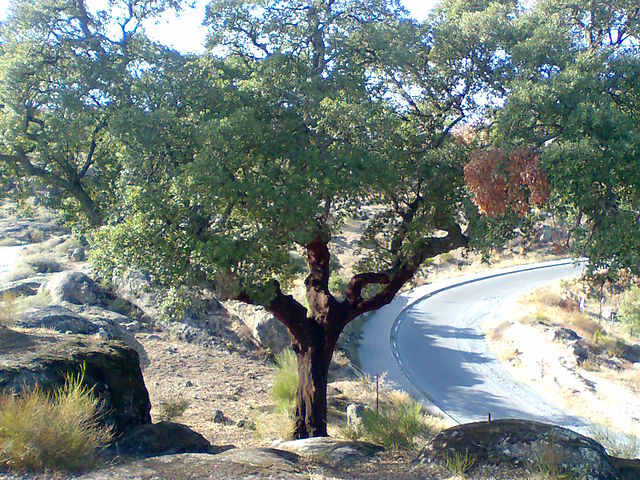 To reach this conclusion, the team carried out an experiment in three forests invaded by P. cinnamomi in the Los Alcornocales Natural Park, Cádiz. For two years, a specific fungicide for oomycetes was applied to the soil with the aim of evaluating its effect on the emergence, survival and growth of seedlings of seven species typical of the Mediterranean forest such as cork oak (Quercus suber), wild olive (Olea europaea), arbutus (Arbutus unedo), barberry (Phillyrea latifolia), durillo (Viburnum tinus), rockrose (Cistus salviifolius) and heather (Erica arborea). The application of fungicide in the field increased the successful establishment of all species.

Gómez-Aparicio and Dominguez-Begines point out that they initially expected to find an effect of the fungicide mainly on the cork oak, the only one of the studied species described to date as highly susceptible to P. cinnamomi.

"A possible explanation is that the susceptibility of Mediterranean species to this important pathogen has been underestimated to date, since its effect on a whole set of coexistent tree and scrub species in forests and pastures has never been proven before. Another possible non-exclusive explanation is that pathogenic oomycetes other than P. cinnamomi, and so far unidentified, are also limiting the regeneration of woody species in our forests. In fact, the number of exotic oomycetes has increased exponentially in recent decades, not only in Spanish forests, but worldwide, in large part due to their introduction into plants used in reforestation," the authors explained.

Figure 1 from a Commentary on this research by Sapsford and Waller (2020). The full figure description can be found here.

The results of this work show for the first time the importance of soil pathogens for forest regeneration in the Mediterranean forest, where their role has so far gone unnoticed. For a long time, pathogens have been considered a limitation for regeneration, mainly in tropical forests, where the high and constant humidity favours the development of plant diseases. However, in a globalised world where the number of exotic pathogens is constantly increasing, this group of microorganisms is very likely to play an increasingly important role in forest dynamics.