It is with great pleasure that we can announce the winners of the 2013 Tansley Medal for Excellence in Plant Science. Due to the extremely high calibre of the finalists in 2013 the judges decided to award the Medal jointly to two outstanding scientists: Dr Li-Qing Chen of the Carnegie Institution for Science, USA whose Minireview is titled ‘SWEET sugar carriers for phloem transport and pathogen nutrition’, and Dr Jing-Ke Weng of the Whitehead Institute, Massachusetts Institute of Technology, USA, whose Minireview is titled: ‘The evolutionary paths towards complexity: a metabolic perspective’.

The winners’ Minireviews are currently published in Volume 201 Issue 4, alongside an accompanying editorial by Professor Liam Dolan, Section and Tansley review Editor, New Phytologist. The winners will each receive a £2000 prize in association with the Tansley Medal award. 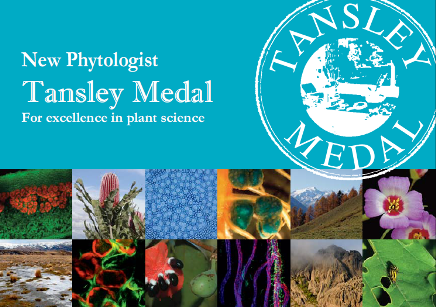 The New Phytologist Tansley Medal is awarded annually in recognition of an outstanding contribution to research in plant science by an individual in the early stages of their career. Shortlisted Tansley Medal applicants are invited to write single-authored Minireview on the subject area to which their publications have contributed. These manuscripts are treated in a similar fashion to other manuscripts submitted to New Phytologist and are handled by a relevant New Phytologist subject Editor and sent for external peer review. All competition articles that are recommended for acceptance are published in New Phytologist. The application deadline for the 2014 Medal has just passed but more information on the Tansley Medal can be found here: http://newphytologist.org/tansleymedal

Thank you to all the applicants for producing such a hotly contested, high-standard competition this year and many congratulations to both Li-Qing and Jing-Ke for this great achievement!

Click on the links below to read the winning Minireviews:

We conducted short interviews with the Tansley Medal winners to find out a little bit more about these outstanding scientists:

Click here to read the interview with Dr Jing-Ke Weng

Click here to read the interview with Dr Li-Qing Chen