There are two things that make trekking in the Alps so good: the thick hot chocolate waiting for you in the refuge, and the variety of landscapes on offer.

Along the mountain slope, different ecosystems are stratified one on top of the other, but recently all of them have been greatly affected by climate change, as the temperature in the Alps has increased faster than the global average. To find a cool habitat, mountain plants have been growing at higher elevations, moving up the slope. Two papers about this climb for survival were published in New Phytologist recently.

Let’s pretend that, instead of sitting in front of a screen, we are at the bottom of a mountain in the Alps on a crisp autumn morning, full of energy and expectation as we start our walk to reach the top. On the first part of the walk we bounce away from cars, people and problems through a majestic forest. Around us there are some larches, a very common conifer species which is also used in forestry.

For three years, Obojes et al., from Technische Universitat Dresden and University of Innsbruck, have studied how the warming climate in the Alps affects larch sap flow and stem radial growth at different elevations. They started from the hypothesis that increased temperatures would be beneficial for larch, allowing a longer growing season. It turned out that at the lower elevations the sap did start flowing earlier in spring, but it also stopped earlier, limited by drought. In fact, higher temperatures induce plants to use more water, while also increasing evaporation and decreasing snow fall in the winter, so that they end up short of water reserves for the warmer months. Radial growth of the larches was also limited by water availability up to 1700m, much higher than expected. Only above 2000m, where water was sufficient, did sap flow and tree growth increase with temperature. Similar influences of temperature and drought on growth had been found in long term studies of tree rings, but Obojes et al. were able to detect them even in the short term by making sap flow measurements. They also simulated how the growth conditions will change across the Alps, concluding that “With increasing temperatures and decreasing precipitation, these [drought] limitations will probably apply not only to inner alpine dry valleys, but also in a larger geographical range.”

If we climb past the forest, higher than the most adventurous larch, we find shrubs and meadows, and hopefully a refuge with our beloved hot chocolate. Then, near to the top of the mountain, where the land is covered by snow for the most of the year, mosses, lichens and small perennial plants live sheltered in the cracks between the rocks (subnival ecosystem). They are tough, long-lived little plants, which can survive for months under the snow cover, and can freeze and defrost several times year after year, clinging to rocks in the strongest winds while exposed to ultraviolet radiation. These plants sound invincible, but unfortunately they are very sensitive to high temperatures, to which their metabolism is not adapted. Despite this, their longevity can make them persist for a while even in warm conditions. This is why the twenty year-long study by Lamprecht et al. from the Austrian Academy of Sciences and The Artic University of Norway was important for clarifying the effects of climate change on this ecosystem.

The researchers measured plant cover, diversity and abundance at the border between the alpine grassland and the subnival zone (around 3000m). During the whole study period, they found an overall increase in the total number of species present on the peaks, as the longer growth season gives competitors from lower elevations a chance. But during the second decade, subnival species populations decreased. Total plant cover also decreased during the years, as the new species colonising the plots could not compensate for the quick retreat of the old subnival ones. Even in the plots that were separated from competitor plants, isolation did not prevent subnival species’ decline. The researchers determined that the main cause of this decline was not competition but climatic factors, and that “a combination of continued temperature rise and decreased snow cover duration has a major impact on the composition, performance and persistence of plant species in subnival communities. This is manifested by an accelerating loss of subnival plant communities in the central Alps.”

So at the end of our strenuous scaling we are finally at the top of the mountain, sitting on a rock, admiring the view side by side with a tiny moss, and there is nothing else to climb. 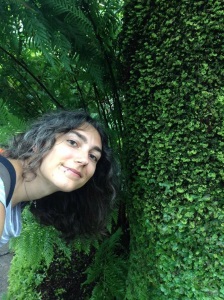 Zoe Nemec Venza is a Sainsbury PhD student at the University of Bristol, in Jill Harrison’s lab, funded by the Gatsby Charitable Foundation. She graduated from her Masters degree at the Universita’ di Pisa, with Francesco Licausi. Her research interests are mostly located in the broad field of plant development. She is particularly fascinated by how cell identity is established and by how developmental pathways changed during evolution. Zoe completed an internship at the New Phytologist Trust during summer 2018.