The search for tabaiba

Dust and desert sand billowed from the back of the black 4×4 as it pitched and bumped along the deeply rutted track. Lisa Pokorny and Riki Riina had been searching the flat and deserted landscape, scanning the parched, orange horizon, deep in the Western Sahara, for two days. With success seeming increasingly remote, they crested a rise and were finally rewarded with what they had been looking for.

Stretching across the wadi before Lisa and Riki were hundreds of plants, each sand-coloured stem crowned with golden yellow flowers.

“The plants were covering gentle sandy slopes with sparse rocks at both sides of the road. It was the most beautiful and rewarding encounter.” – Riki Riina 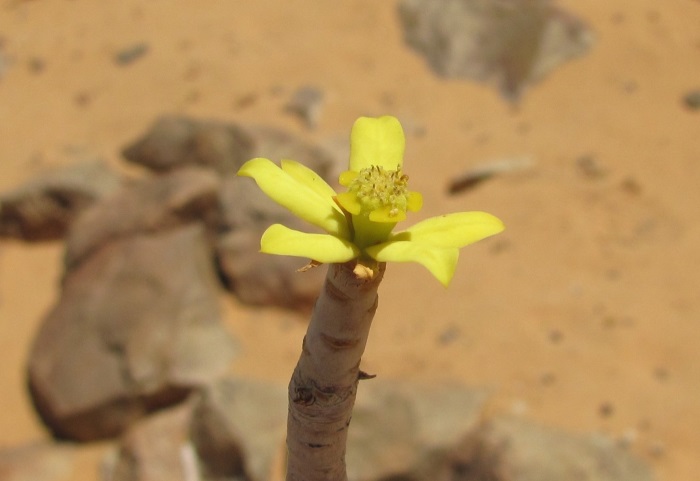 Euphorbia balsamifera is a charismatic species. Commonly known as ‘tabaiba’ in the Canary Islands, it is also well known by the inhabitants of the African Sahel. Lisa, Riki, and their colleagues, had become intrigued by an unusual specimen.

The specimen that caught the researchers’ attention had apparently been brought back from the Sahara, well outside of the more humid Sahel region where they expected to find the plant. And so it was that Lisa and Riki found themselves on the outskirts of the town of Laayoune, near the Atlantic coast, driving east into the Sahara, searching for tabaiba.

The first day was spent exploring the desert, without success. Believing that the record attached to the specimen must be wrong, Lisa and Riki spent the night poring over a map of the region, looking for clues. Careful study revealed an old road, which the researchers had passed by. The plant could be along the old road! 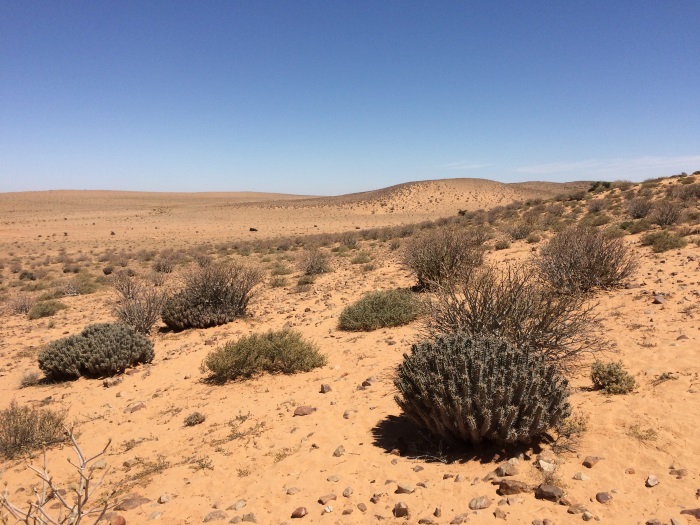 That road to Smara had been long abandoned, and was in bad shape. After several hours of tortuous travel through a flat and deserted landscape, the researchers were greeted by the sight of hundreds of individuals of the plant they had been searching for, growing in the middle of the desert. In an area where few other plants grew, the tabaiba clearly dominated the site.

As their driver waited patiently, Lisa and Riki took samples from the population of shrubs. The shrubs had dropped their leaves, so only flowers and fruits remained at the ends of the branches. It was while she was walking around among the shrubs that Riki took the photograph on the cover.

In their paper published in New Phytologist, the researchers describe how they uncovered the enigmatic and long forgotten Euphorbia balsamifera subsp. sepium. Originally described in the 19th century, the plant has had a complicated taxonomic history, having been considered both a synonym (a different name given to the same organism) of subsp. balsamifera, as well as a species in its own right (Euphorbia sepium). They obtained tissue samples from subsp. sepium and showed for the first time that the plants from across the Sahel were more related to each other than to plants of E. balsamifera growing to the east (Somalia and Southern Arabian Peninsula) or the west (Canary Islands) of the Sahel. 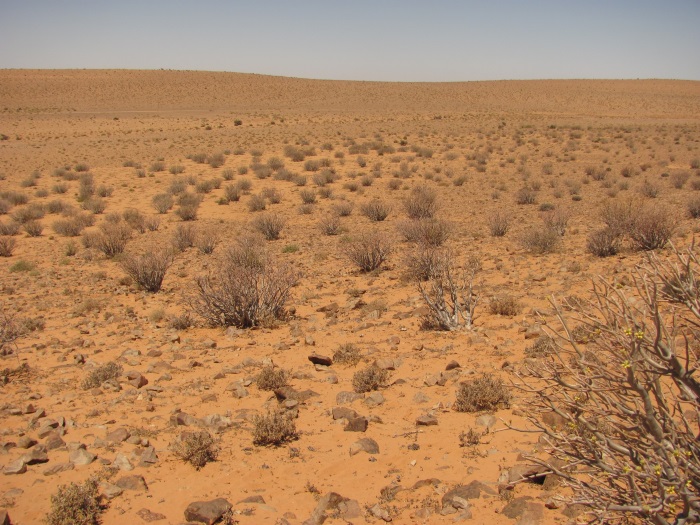 Euphorbia sepium may indeed be a species in its own right. For the researchers involved in this study, the story is far from over, however. They plan to incorporate the samples taken from the Western Sahara populations with others from the Sahel, to do a new phylogenetic analysis which, they hope, will help to further reveal more details of the natural history of this enigmatic taxon.