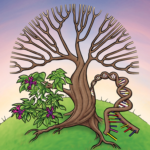 Ask a biologist whether the chicken or the egg came first and you’ll probably be lectured on the basics of evolution, hearing how a not-quite-chicken laid an egg containing a mutant (the chicken) with advantageous developmental differences that were passed on to the next generation. This is a simplified example of evolutionary developmental biology (evodevo), the study of the evolution of developmental processes that results in different morphologies between species.

The field of evodevo is often dominated by animal research, but plant evodevo scientists were brought together in Beijing, China, earlier this year at the 37th New Phytologist Symposium (37th NPS) entitled ‘Plant developmental evolution’. The meeting, which was summarised by Liao et al. (2016), highlighted the latest research in three major themes; the transition of forms, repeated phenotypic convergence, and constraints on phenotypic evolution.

How did flowers evolve from leaves? What changes occurred during the domestication of crop plants? Which genes cause differences in leaf morphology between species?

Many of the morphological differences between plant species are caused by genetic differences in key regulatory genes involved in development. A mutation in a developmental gene can change the structure of the protein it encodes, altering the way it functions within a cell, while mutations that alter the amount a gene is expressed can interrupt its activity, leading to new plant forms. By studying the genes of some of the simplest plants, we can begin to understand the evodevo processes that led to the fantastic diversity of plants in the world today (as was discussed at the recent New Phytologist Symposium ‘Colonization of the terrestrial environment 2016’, which you can read about here).

Gene and whole genome duplications are quite common in plants, resulting in two copies of key developmental genes that can take on diverse functions and lead to new plant forms. For example, attendees of the 37th NPS heard about the work of Martins et al. (2013), who found that the duplication of the Dfr (dihydroflavonol-4-reductase) gene in slender clarkia (Clarkia gracilis) allowed this plant to diversify its pigment production and produce red-purple petal spots on a pink background to attract more pollinators.

Across the plant kingdom, there are numerous examples of unrelated species independently evolving the same trait and converging on an optimal form. For example, C4 photosynthesis can evolve from C3 plants by the repeatable evolution of biochemical modules in a particular sequence, which has occurred at least 66 times during plant evolution.

One of the most popular examples of convergent evolution in plants is the transition from radially symmetric flowers, such as primroses, to bilaterally symmetric flowers, such as violas. These floral adaptations have been achieved by various modifications of the gene regulatory networks involved in flower development (described in a recent review by Specht and Howarth (2015)) and have allowed plants to evolve new pollination strategies. The 37th NPS delegates heard how changes in different sets of genes and networks between species can result in the same overall phenotype, highlighting that evodevo can take many paths and converge on a similar solution.

Evolution is a continuous process constrained by the current genotype and phenotype of a species. A plant cannot develop legs because it does not have the animal-specific genes involved in leg development, but some plants have turned their leaves into thorns by altering the regulatory genes involved in leaf development. Certain traits require a precursor state before the next stage in a developmental process can evolve.

Many genes are pleiotropic, meaning they influence more than one phenotypic trait. This can be a problem for evolution; for example, if a gene regulating flower colour is also critical for the development of the seed, then any changes that might result in red rather than blue flowers might also kill the embryonic plant, preventing the change from being passed to the next generation. This is sometimes alleviated by a gene or whole genome duplication, allowing the two functions of the original gene to be divided into separate paralogs. The 37th NPS attendees also heard how genes such as FLOWERING LOCUS C can contribute to a variety of phenotypic traits by acting in independently regulated pathways, which can remove some of the constraints of pleiotropy.

The 37th NPS delegates discussed potential solutions to some of the most challenging aspects of evolutionary developmental biology, including the need for a better understanding of the individual steps involved in the evolution of a new developmental trait, each of which must confer a selective advantage to the organism in order to become fixed in the population.

The phenotype of an organism is a combination of its genotype and ecological context, so there is also a need for detailed biological measurements at each stage of a plant’s development in a range of environmental conditions. This will allow evodevo researchers to tease apart the environmental effects from the heritable genetic differences between species, although it will require the collection of huge amounts of data from each plant.

This leads to another question. During the conference, developmental data from several new non-model plants were presented. With the rapid improvement in high-throughput sequencing, should the evodevo community expand their focus to include a large variety of plants, or focus their limited resources on a few species representative of major phylogenetic clades? The selection of a few key species is difficult; however, a future workshop has been proposed with the aim of identifying new plant model organisms that will be the focus of evodevo research.

To find out more about the exciting advances and evodevo challenges discussed at the 37th New Phytologist Symposium, read the meeting report from Liao et al. (2016) in issue 212:4 of New Phytologist.