In our first guest post on the New Phyt blog, Olivier Hamant describes his recent Tansley insight, ‘How do plants read their own shapes?’ Would you like to contribute a guest post? Get in touch with Mike. 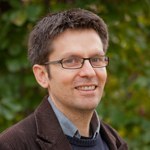 A few years ago, at a science fair, a kid wanted confirmation that plants are indeed alive. The alternative would be that plants were like stone, immobile, and thus dead.

Although we may find this question either cute or worrying, this uncertainty could be more widespread in the general audience than you might think. It goes back to Darwin’s famous and often misunderstood quote “life is motion”.

When dealing with plants, it helps to be open to the fourth dimension – to see motion in a different time frame – to experience the full potential of plant motion. Plants move a lot, through their growth for instance to explore their soil environment, and they also curve their stems and leaves to face the sun, fight gravity or through the somewhat more mysterious nastic movements.

Thanks to a thriving plant research community, we have further evidence that plants are also able to feel their own movements and their own body. While this last point might come as a surprise to some, it is already well established that plants are able to ‘sense’ their position in a forest, notably through the shade avoidance syndrome.

Maybe less widely included in textbooks is the following: plants are able to sense wind, and thus the deformation of their body. In particular, they usually stiffen their stems when these are bent too often. Plants are also able to sense their own weight: branches carrying fruits or under heavy loads of snow resist this weight by stiffening their branches asymmetrically. The same goes for branches without fruits or snow, simply because a branch is usually not vertical and bends under its own weight.

More recently, this perception of the self, or proprioception, has been extended to basic plant growth: plants are able to sense the way they grow, independent from environmental cues. Interestingly, this seems true at multiple scales, from sensing curvature during the gravitropic response, to mechanical conflicts between cells growing at different speed. This is highlighted in a recent review that Bruno Moulia and I recently wrote for New Phytologist (212:2, 333–337).

Proprioception is certainly not a new concept, as it is well established in zoology, in which muscles were shown early on to act as stretch sensors too. The news here is to consider plant motion in all its complexity: being slow does not mean that plants are unable to feel their own shape. They do, and this is one more thing that makes them very alive, and fascinating.